Waiting for the Right Move 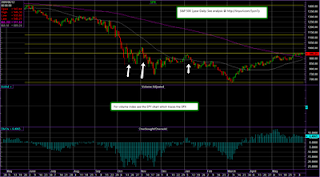 Last week was a treading week. I said tread not trend or trade. I had a feeling that most traders and voyeurs of the markets were fixated on the $SPX. 920-950 was the key above which they could breathe, below it they would sigh or die; flip that for bears. I'm not sure, but I would imagine that a significant move either way would have had major action, which I think can still occur next week because the watch is not over. Notice that I wrote a significant move not the slightly bullish nibbling that has actually occurred, because we did gain on the week. This treading should be no surprise as it is the first retracement line for the 2008 high at 1406 set on 2008/05/29 and the fact that we peaked ever so slightly above the mark is a testament for the test. Of course it is not assurance that it will continue.

What is encouraging, in addition to the slight upward move, is that the price has not oscillated between testing the 200dma and the retracement line. If it had, I think there would be many traders already washed out; but because it's clinging closer to the retracement line, it's encouraging more buyers who are anticipating the next move up. The fear of losing out is strong and one of the hardest urges to resist.

The other encouraging sign, and maybe more significant, is that we've been here before with much more volatile reaction. Notice on the chart: 2008 Oct 22, Nov 06, Nov 10; each only a single occurrence with a strong pullback, the last being on 2009 Jan 06 only breathed at the retracement line before scuttling down and setting the low in March. So what is different?

The 200dma is now below the up trending price, ready to meet the 50dma which has followed the trend up. Whether the 50 dma will cross over the 200dma, only time will tell and given the current set up it is easily imaginable that it will. The strength of that possibility is what is currently holding this treading (sideways) pattern. From here there are three possible outcomes that I see which are all compelling enough to have me wait until it's revealed. The first, being the most obvious, is that we break out above with the 50dma being the rocket booster and don't look back until 1000 or even 1040. The second that once the 50dma hits, the market will pop to just above into the 960-980 and pull back on strong sell off to retest the 200dma after which it will take off again; of third, that it will break the 200dma and retest the lows.

I think we only have the chart for a visible and visual answer. Other data such as, the world is still spinning, and No. Korea has not yet wiped California off the map, or any other fleeting news about money, real estate, jobs, politics or life, are only opinions. Although important and all enter the equation, they are not visibly measured yet; or at least not yet accurately. A chart however gives you a visual picture with which you see history and can draw conclusions, given that certain things about behavior remain the same.

Predictions discussed by the media and written in blogs like mine are both bullish and bearish. My plan is to be ready for whichever way the market moves, remembering that, with all the possible trades in the markets, there's always time to join the parade before it passes me by.