Fighting a Battle (Part II) Visions of Change and Hope 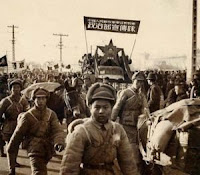 My quote: " When the many have so much hatred for one man (justified or not) it creates the mob from which revolutions become reality." In this way the Socialist Marxists (Bolsheviks) toppled a Monarchy and in this way they may topple the greatest Republic ever to grace mankind. I am using the word "revolution" in the true sense.. which does not mean there has to be a gunshot but it means turning around/over. Unfortunately, death occurs regardless how bloodless the coup; and the numbers of them are more hidden when the battle is not fought openly. Afterward once the elation wanes, you may find that the "change" you wished for is not exactly what you envisioned and hoped for. Those two words, "change" and "hope", are indefinable for the many because they are very individual and therefore it's impossible to carry out in your vision but it's very possible to carry it out in the vision of the one you give power to. Hence, "be careful what you wish for" comes to mind because all wishes give power of the vision to the granter of them and not the beggar of them.

The above was written by me a while ago but what brought it to mind again is that , Alexandr Solzhenitsyn died, so in honor I took out my copy (rather my father's copy) of his book: The Gulag Archipelago. A book with many highlighted passages and with lots of marginal notes left by my father who barely survived some of that horror. Perhaps Solzhenitsyn's death is a timely signal with a purpose for all of us to remember that we are not immune to making mistakes that cause much pain for future generations. It happens when we dismiss facts and run after hopes. It happens when we hand over power to others only too willing to run our lives.

Today's trading day was one very much like that. Waiting with almost complete stillness for a body of men to decide what the future of our money's value will be. That magical hour came and then traders waited for someone else to analyze it's results. I've been watching in amusement for years. It's almost comical if it weren't so tragic, because it shows that so many are very willing to have others decide how they should interpret facts and opinions. Resulting in a group mentality which totally ignores the fact that this country is doing well, despite the publicized so called worry in Washington. It ignores that this country has been creating more wealth since 2003, resulting in the most tax revenue collected in the last 4 consecutive years than ever before in history. It ignores the fact that the rest of the world is still growing and still in need of our equipment, education and inventions. It also ignores the fact that most businesses are not effected by it because most businesses serve the local community and not the world. We may be in a slowdown now, but we haven't imploded and I doubt we will if we continue the fine American tradition of ingenuity. We will not solve the energy shortage, nor the mortgage defaults in Washington. We will not solve the job losses or gains there either. Where it will be solved will be among the people living here, willing to risk and invest in their own ideas as they see a solution for a need. Despite all that you may hear or read that's how it's been done. The electric car has been available for many years for anyone who wanted one and not at a prohibitive cost. The light bulb was not invented in Washington, nor was the automobile, the airplane nor any miracle drug, or almost anything else that you can think of. It was it's people that created the most successful country in the world. It happened with hard work, much failure and finally success, mostly without fanfare amongst it's citizens and not in Washington.

Traders and investors will continue to flock to stocks (read companies) that are successful in bringing innovation to the forefront and available to all. But nothing can make people embrace what they do not want or are ready for. Unless, of course, you elect a government that will tell you what you can or can't do, can or can't have, what to think or not think, all because you gave it too much power to decide for you what is good for you or not. Drill or not to drill (for oil) is no longer up to the need of the people, nor up to the companies that helped build this country to greatness. They are now bad, shunned, entities labeled a greedy bunch. So in order to teach them a lesson, this government thinks it's best to send trillions of dollars overseas than to keep that money at home available to it's citizens. That's how a government with too much power solves problems, all the while pointing fingers and blaming others for it's lack of action. Ignoring the people's desire is dangerous, but blaming one man for it is even more so.

Great blog today, and also good job on bidu. I never got in because it never hit my trigger price. I should be in the room tomorrow morning.