Tweet *****Take your pick for the ending of that saying but nothing proves the theory better than what is currently unfolding on San Francisco Bay where the oldest trophy race us currently taking place. The 34th America's Cup, which has been a hot expensive race for the coveted Cup for over 150 years looked to be a sure winner last weekend with only one more race to be won.  Oracle Team USA was down 8-1 and  Emirates Team New Zealand  only had one more race to win to take home the Cup.

This past weekend Oracle Team USA has won all races closing the gap to 8-5  and leaving Emirates Team New Zealand  and their fans disappointed.  One can blame fate weather, rules, etc. but one also has to consider that the other team had to bear the same. So it must come down to analysis, performance, learning and determination most of all.

The boats were not equal at the start of the race and certainly with  #ETNZ having won the Louis Vuitton Cup just a few days before the start, gave them the advantage of practice and ability to tweak their equipment to the conditions. Something that the defender of the Cup, #OracleTeamUSA could not, as they had to wait for the outcome in order to race against the best challenger, or the winner of the Louis Vuitton Cup. Add to their disadvantage also by being given a -2 start position due to a penalty, so they were 0 to -2 before they hit the first start line together. EmiratesTNZ quickly showed dominance of the waters as you can judge from the score but OracleTeamUSA did not give up even as many around judged the races to be disappointing and the New Zealand boat to be better designed and faster.

We, traders know well that that practice trading and real trading are vastly different for only one reason: actual risk and the unknown of the competition. How we analyze and pith ourselves against the challenge will prove our learning ability, reaction to adverse conditions and our determination to reach our goals. Being able to quickly adapt is most often the key to such a challenge but also the confidence in our selves  and abilities which will propel us to move forward.

Watching these markets over the years is not the same as trading them. Learning to trade is not the same as the actuality of trading. Being the the "waters" with other traders moving with or against the currents of the markets, catching the winds in our sails with a lucky report or two, but most of all being able to adapt to conditions and tweak our plans to be able to take best advantage of the conditions.  That is what the best traders do and must do to become winners.

So now standing at 8-5 points, and realizing that the score is actually 8-7 wins, we can now see that the race is much closer and more exciting and neither race nor teams can be deemed disappointing. So if you cannot be By the Bay watching with me, you can see the live action online  http://www.americascup.com/en/schedules/races 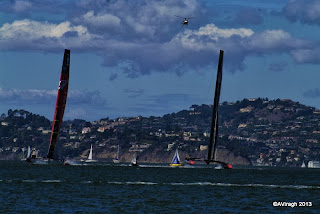 See you on or By the Bay, California, USA
Happy Trading, Living and Dancing (and Racing)
Anni