In Hungary it used to be that many laughed at the raising of red flags, the "beloved" Soviet banner, as the color red meant a call to revolt or revolution. Revolution in true meaning means a turn about or around.

Well, I have red flags everywhere. No, not the kind you may see unless you look at history. I may be missing out on a lot of sky, but it's the abyss that is being ignored by enthusiasts of the climb.

While hiking, I've always felt that going up was easier than the descent, unless on skis where the reverse it true. Of course, the snow on this hill has long melted with the high volume and increasing traffic leading upward, therefore the descent I fear maybe more rocky, which at high speed may remove skin and strip flesh to the bone.

It is tough and dangerous to go against a stampede and for traders it's often deadly. So this by any means does not mean a change in course, yet, but more a sideline move. We've had a nice climb and we can say we've led the pack.

Since my originally calling BIDU long, privately, the climb has ascended nearly 300 points, since my posted public calls nearly 200 point gain has been recorded. That is nosebleed speed as all skiers, climbers know it. Danger of altitude sickness is high. Yet is shows no sign of alarm, as it may take off after GOOG at even higher speed depending on, the earnings report of today, post market.

Although BIDU is the focus of this article today, Monday, it is not the only one at such high elevation, there are numerous others that when looking down have a deep precipice to worry about. .. to be continued

As witnessed Monday after market close, BIDU dove off it's precarious position and may have become the first crack in the slab which may yet to become an avalanche. Certainly the reaction to APOL's earnings report was extra-ordinary, Tuesday after market. So the market is definitely in a cautious if not a fearful mood. Looking at Tuesday final hour, I felt that the market was "saved by the bell".

Yet the question now becomes whether the long awaited correction will be happening all in unison, or will it wash out with a few at a time and over time. The climb certainly was that way, so can the decline be the same? That, indeed, would be interesting and would certainly disappoint the hungry short holders waiting for their desert. One thing for sure is that the road down will need to be taken even if the market still has another peak to conquer before it's long descent. 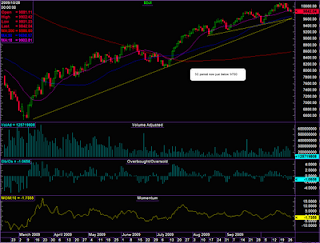 Another announcement, $FSLR, after markets yesterday evoked a quick selloff, furthering the evidence that the nerves of this market are frayed and the possibility of a panic could be triggered by bad news. Today shall be interesting, indeed.

My last notes in @tickerville: DJI took out the last 2 days lows and it may finish lower. It broke the 9700 to 9685 the trendline for possible bounce if it holds 9652. I really wonder if it can; certainly by the evidence below, the selling is now accelerating and momentum is diminishing. 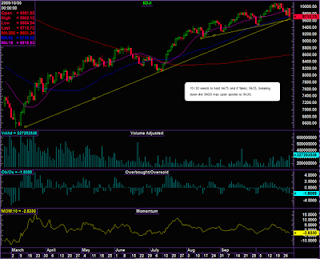 See you Monday and I hope it won't be black.
Happy Halloween
Boo
Posted by Anni_V